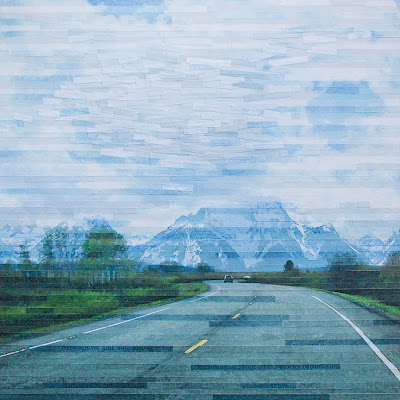 I wanted to make one more piece for the owner of Xanadu Gallery in Scottsdale, Arizona, to choose from, so I worked on this image of the Tetons. This is another 16" x 16" cradled panel like last week's. I made a piece earlier this year where I angled a few strips across the horizontal pieces, but in this one I really broke out of the straight lines. I built up a lot of angled pieces in the clouds to give a feeling of moving, billowing clouds.

I'm hoping this work also conveys some of the wonder of the Tetons. The mountain range doesn't have any foothills, so it just rises straight up nearly 7000 feet above the valley floor! We were shocked at the views we had driving along the road in Grand Teton National Park and wondered aloud if we were going to drive right up to the mountain base. I took the photo this piece is based on while we were driving toward one of the peaks in the range. In one of the digital variations, I added some text in the road about the Tetons; it's in the darker strips. I like the feeling this has of being on that road with the two cars up at the bend in the road ahead.
Posted by Lori Reed at 2:16 PM No comments: