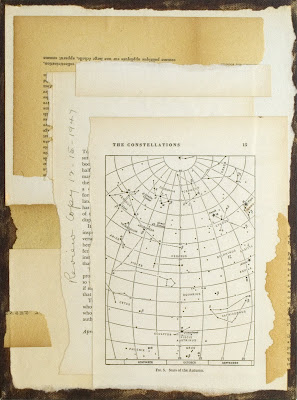 I just received an e-mail from the director of the Abecedarian Gallery in Denver that she'd posted an online pdf catalog for the upcoming "Imagination Navigation" show that includes one of my collages. The work in the show is really really nice. I'm honored to be included.
http://www.abecedariangallery.com
Posted by Lori Reed at 7:59 PM No comments: 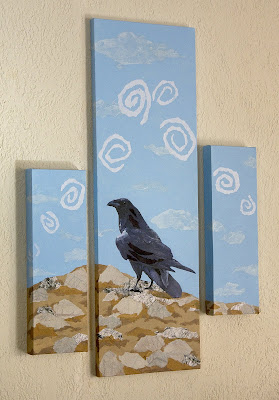 Here's what the work looks like on the wall. In answer to Crystal's question posted below about why I chose to make the side panels deeper... it wasn't actually planned! I'd purchased the 12" x 36" canvas thinking I'd push myself to do a bigger collage than I normally make. Then I came up with the idea of putting the raven in the center of three panels and having the spirals cross over all three. I had two narrow canvases that seemed to be a good size but were different in depth than the large one. I decided that would be OK. Logically the center one would be the thicker with the side panels subservient to it. However, I'm pleased with how this worked out as it has a feel like wooden religious triptychs have -- the ones where the side panels are hinged and can be closed like doors over the central painting -- when the panels are open, they are closer to the viewer due to being hinged at the front of the boxed structure. Since my side panels stand out from the wall more, they also serve to funnel the view right into the raven.
I've decided to call this "Messenger Spirit" as that is what Native Americans called ravens. To them, the raven symbolized the black void in space which draws in all energy toward itself and releases it in new forms. That idea works well with the spirals, don't you think?
Posted by Lori Reed at 11:39 AM No comments: 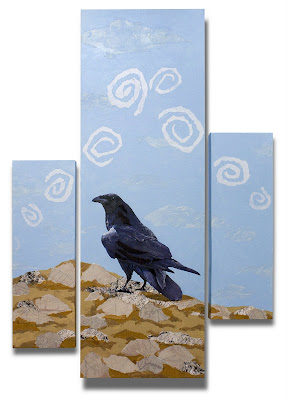 I'm hoping to line up a gallery show with my spiral series (all are 9" x 11") and wanted a bigger work to kind of "anchor the wall" in a gallery. This piece is made up of three canvases that add up to 25" x 36" -- the two at the edges are a half inch thicker than the central panel. I'm featuring a fabulous raven photo Rob took in Yellowstone that I used the "paint daub" filter on in Photoshop. The raven is sitting on ground made up of some torn pieces of the "paint daub" rocks, two different scales of topo maps, tissue paper and paint. (If you click on the image you can see the details better at a larger size.) I usually set my most recent collages on shelves in our dining room to live with the art for awhile and see how it looks in different light. This is way too big for the shelves AND can't all sit on the same surface as they need to hang at different levels... may need to remove a painting in the living room for awhile to see how this looks on a wall!
Posted by Lori Reed at 2:20 PM 2 comments: